Polaris, a story of the lightsaber designed for combat.

For your safety, we designed Polaris EVO and Anima EVO RGBW to comply with the electromagnetic compatibility requirements defined by:

Anima EVO, the core of Polaris has become an open source project! Find the code on Github and help developing new features with your skills.
Not an expert? Support the project with development suggestions on our dedicated Facebook community.

Polaris presentation to public occurred during LudoSport EuropArena on May 22nd 2015, the first and largest International lightsaber tournament organized until then. A golden Polaris SSe-1 has been awarded to the tournament winner. 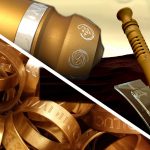 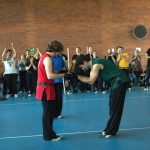 Before that day, athletes who wanted to compete with a lightsaber had to use a replica or, in general, an item that was not designed with the intent of being optimized for combat. LudoSport Masters created in 2006 a combat discipline with the lightsaber that spread a common language among the people practicing it, however the athletes didn’t have a reference for their equipment yet.

LudoSport Academies had groups of sabersmiths who constantly worked to modify saber models available on the market to make them suitable for combat. It was an expensive and time consuming activity that had an adaptation as its best end result. The modified hilts still had weaknesses inherent to a design originally conceived for toys or a replicas, therefore requiring frequent maintenance to fix ruptures of multiple kinds. 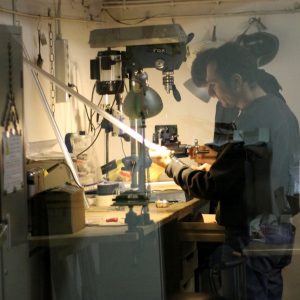 With the returns collected at 2014 BootCamp, LamaDiLuce began the design of a new saber that would have filled the gap… and much more!

After a brainstorming, the name “Polaris” has been selected by LamaDiLuce and LudoSport Founders. Like the name of the star it bears, Polaris was intended to become the reference for hundreds of lightsaber enthusiasts who wanted to compete with an elegant weapon.
Since the beginning, the plan was to create several saber hilts, so the name of the first in the family was added by the identificator “SSe-1”, officially standing for Sport Saber evolution 1, the first combat ready lightsaber featuring at the same time:
– ergonomic grip on emitter, main body and pommel;
– activation / deactivation with gestures;
– protected 2.900mAh Li-Ion battery
– microUSB port for charging and configuration;
– battery charge status notification;
– pommel cavity for balance customization;
– configuration software to change RGBW settings and sound fonts; 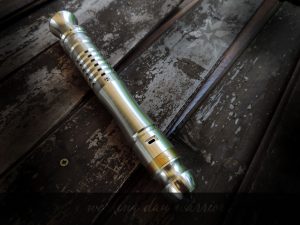 The production of the first 99 hilts has been funded by enthusiasts who financed the project when it was still on paper. These hilts can be recognized from 7 symbols engraved on the main body collar on the emitter end. 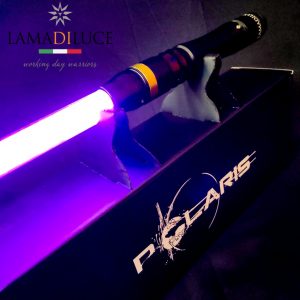 In 5 years, we collected thousands of feedbacks from worldwide users, and we did not rest. Since the first production, we dedicated resources to fix the typical issues of a totally new project and progressively set the bar higher on both quality and performance. Several improvements have been released year after year:
– simplification of gestures to arm / disarm;
– increased customization level for RGBW Fx (Clash color, flickering);
– colored anodizations for hilt parts;
– introduction of SSe-2 hilt, the shortest body lenghth optimized for dual wielding;
– introduction of a coupler to enable the union of two hilts into a saberstaff;
– simplification and increase of mechanical performance of chassis enclosing the soundboard, battery and speaker;
– introduction of X2 Emitter to increase SSe-2 hilt size to LudoSport long saber standard;
– introduction of polycarbonate tip for combat blades with increased mechanical properties while reducing weight;
– laser engraving service;
– introduction of SSe-3 with the ability to customize hilt size;
– introduction of brass and stainless steel parts to enhance the balance customization ability;
– introduction of Artiglio emitter to swap blades without need of tools/set screws; 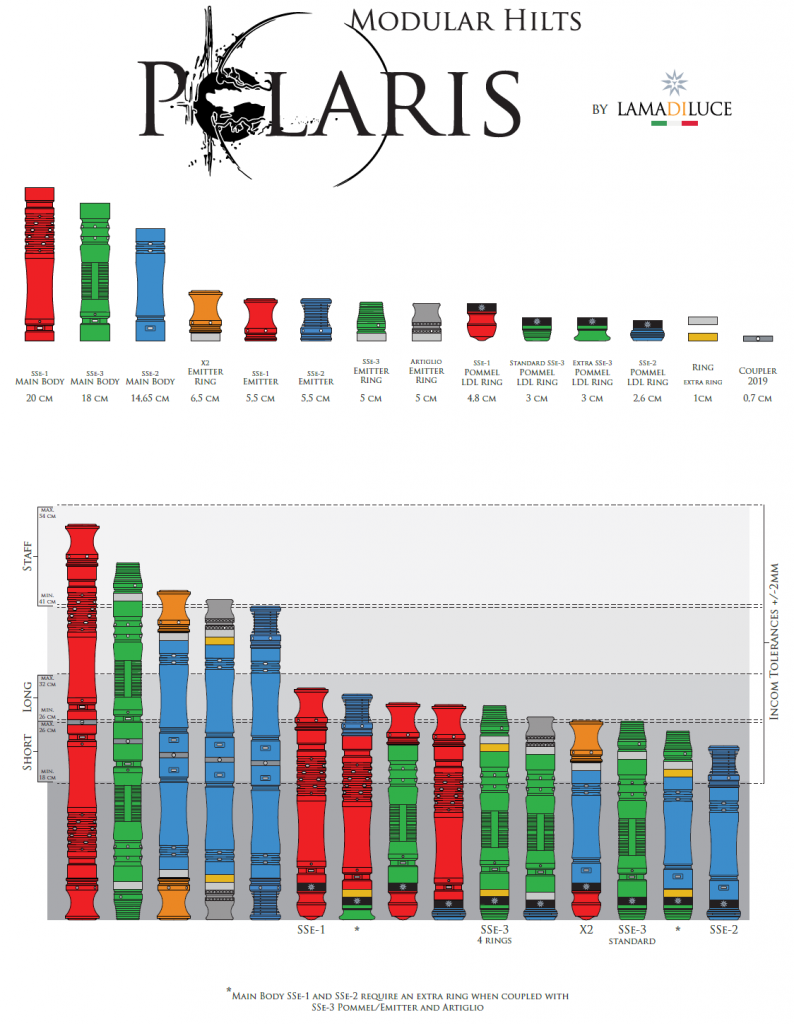 After five years of honored service, the original Anima RGBW production will be discontinued to fund a revolutionary open source project: Polaris-OpenCore
PHASE 1, known as “StarCore” and consisting in hardware Alpha testing and certification process of the new Arduino based electronic module Anima EVO is almost complete thanks to the support of Crystal Cave team.
A selected group of developers has worked on PHASE 2, performing the Beta testing and setting up the foundations of the open source code that is now accessible on LamaDiLuce GitHub repository, PHASE 3.
Now, the power to contribute with your ability to the evolution of Polaris EVO is yours! We look forward to discover the features of the next generation of custom combat-ready light saber!

Evolution has never been more revolutionary! 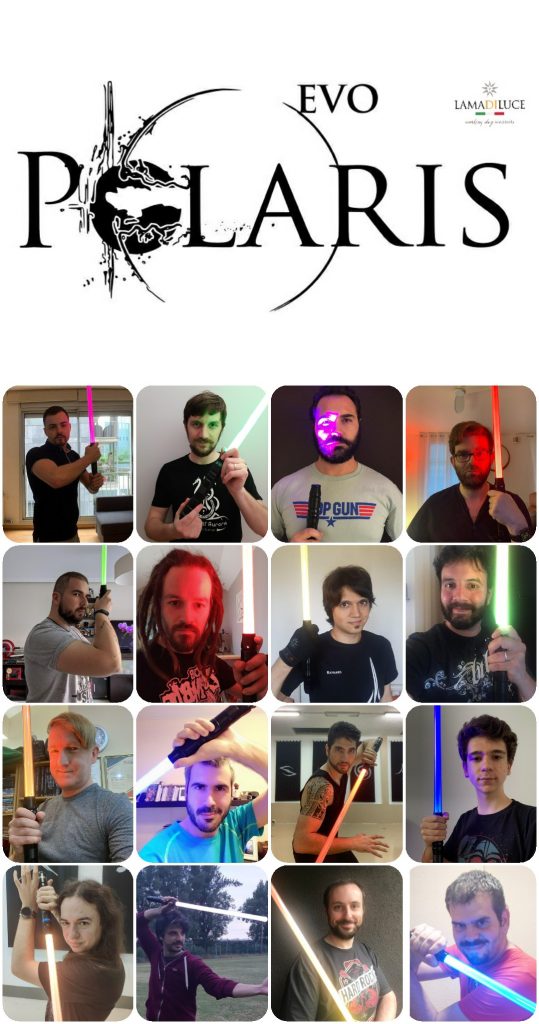 Significant resources and effort of the initial design have been spent to simplify, improve and enhance the signature characteristics of 2015 electronic core.
The main new hardware features of Anima EVO are: 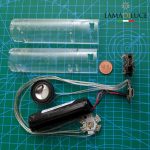 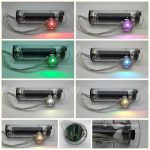 – Smaller and more powerful board!
– No more need to calibrate! Anima EVO automatically sets up and adjusts on its own, making the gesture recognition almost immediate;
– No PC or laptop required to change colors! Blade color can be selected with a gesture among pre-sets;
– Li-ion 18650 capacity is increased to 3.200mAh granting even more time to train between charges;
– Faster charging! More battery capacity won’t require you more time to charge it;
– Kill switch accessible without needing to remove pommel;

Once PHASE 2 is completed by the team, with PHASE 3 you will be able to download the Open Source code and contribute to the evolution of Polaris, are you ready?
Not an expert in programming, but you like our initiative?

You can still help the project filling in this suggestion form indicating the feature you would like on Polaris EVO. 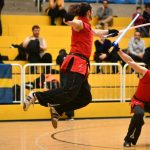 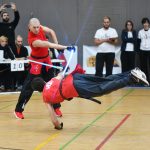 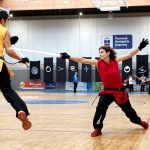 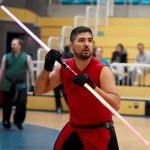 Commonalities will help the many owners of previous Polaris models. The highest level of reverse compatibility with Anima has been pursued, granting:
– Same microUSB type B charge port. If you own a previous generation Anima, you can use the same cable to charge / configure it;
– Same core dimensions. Anima EVO outline is the same as the previous generation;
– Same weight. No substantial changes, so that saber balance will remain the same;
– Same spare parts. RGBW LED and speaker do not change;

Increased performances and potential could not have been achieved without few changes:
– a small hole in the main body of Legacy Polaris will be needed to access the Anima EVO Kill Switch (a set of instructions will be made available);
– a new configuration software will be needed to configure Anima EVO, Legacy FiammaManager is not compatible with Teensy/Arduino;